Edit
watch 01:40
The Sandman Will Keep You Awake - The Loop
Do you like this video?
Play Sound
This article is a stub. You can help Survarium Wiki by expanding it.
Survarium 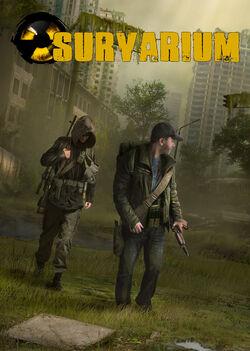 The game is primarily a first-person shooter, but also features several role-playing game elements. Players are free to use whatever equipment they can carry, however new equipment can only be purchased after gaining a certain amount of reputation with the factions in the game. They can also further increase their proficiency in certain aspects by gaining and distributing experience.

Health Condition defines the amount of damage your character can withstand before being out of combat. It is set to 100 points. There are several states of Condition that are shown on the HUD

Your character can heal wounds naturally to a certain degree. Regeneration indicates the speed of this process (+1% regeneration = +1 HP per seconde). Items can have Modifiers that increases Regeneration speed.

Damage your receive from weapons are localized on your character depending on where the attack lands.
There are 6 locations :

The head is the most vulnerable area. A single hit will generally kill you unless you have protection.

Effect of damage depending on Hit locations

Stamina determines the ability of your character to sprint and jump. When sprinting or jumping the stamina bar located in the bottom right corner of the HUD gradually empties. When it is depleted you can no longer sprint nor jump until some stamina is recovered. Some skills such as Endurance or Breath help your character be more athletic.

Several factors can improve the Weight a character can carry :

It is unclear if the hindrance start is moved up when your maximum portable weight is higher. .

Armor reduces damage by a flat percentage, which means that if you have 60 armor and get hit by a weapon with 20 damage and 50 penetration you will only take 18 damage.

Isolation measures the protection of your character against harmful elements such as gas, radiation, and other anomalies. By default your character has none. If exposed too long, your character dies. Using armour helps you protect your character and last longer when exposed to these elements. In addition you can wear respiratory systems to provide you oxygen when exposed to harmful gas (white or colored mists on some areas of certain maps). The exact mechanics explaining how isolation works is unknown to us, the players. No matter how much protection you have, it seems you are never fully protected against anomalies. Does all equipment isolation points stacks to make pool that is used to calculate the amount of time you can last or the weakest equipment is used instead (weakest link) ?

During a PvP game, you get points for achieving actions that helps your team :

The score you achieve at the end of the game is used to calculate your Ranking.

He also gets a reward described in the following table

For each match played you get experience points. After reaching the required level of experience, you are promoted to a higher level, and the experience is reset. This process is repeated, with the amount of experience required to progress to the next rank increasing each time.


Upgrading and modifiers: To get the most out of your items you will need a lot of currency to get the modifiers you want. If you choose to modify a blue item you can only change that modifier and not the new ones you get with upgrading the item. Example: You have a blue mosin rifle with +3% damage. Deciding you want to change this you will get the option between 3 new modifiers, these are can range in amount and type. You choose the +5% damage modifier. Now you upgrade the mosin and get a green version. You will still have the +5% damage but you will also get a new random modifier. This new random modifier can NOT be changed since you already altered the previous version(blue).


Some clothes such as gloves might come with modifiers by default, those are shown with a black border. You can't stack modifiers on the same item. So if your item has a default modifier you will not be able to get another of the same type. Nor can you change the default modifiers.

Maps are designed to be relatively large with several routes through them, offering options for players of all types. In some game modes players will also encounter enemy AI in the form of mutants and environmental hazards such as anomalies. Depending on the player's distribution of skills they may find these more or less of an obstacle, as a player who specialises in hunting artifacts will find it easier to navigate anomalies but more difficult to engage in firefights.

Players are survivors of a massively ecological catastrophe described as a green apocalypse which has only vaguely known causes. Impassable forests have advanced on cities while animals attack industrial complexes, military structures, warehouses, and power plants. Strange plants and mushrooms have appeared which can grow through concrete and steel. Scientists are unable to cope with the anomalies expanding across the planet with terrifying speed. Nations have collapsed and anarchy has spread throughout the world.

Survarium will a use new proprietary technology currently known only as the "Vostok Engine".